How College Students Really Feel About Free Speech on Campus

A new survey finding that college students generally support free speech also shows what for some is a worrisome divide over what students value more: an “inclusive society” that “welcomes diverse groups” or protecting “the extremes of free speech.”

The Knight Foundation’s  “Free Expressions of College Campuses” report polled students over the course of three days on their views of protesting, offensive language, and the inclusivity of on-campus climates.

One question was whether students agreed with shouting down speakers or trying to prevent them from talking. While the results showed only 6% responded that it is “always acceptable,” 45% of students said it is “sometimes acceptable.”

Jonathan Butcher, senior policy analyst in the Center for Education Policy at The Heritage Foundation pointed out that, in total, 51% of the college students surveyed say they believe that violating another’s First Amendment protections because they disagree is acceptable to some degree. 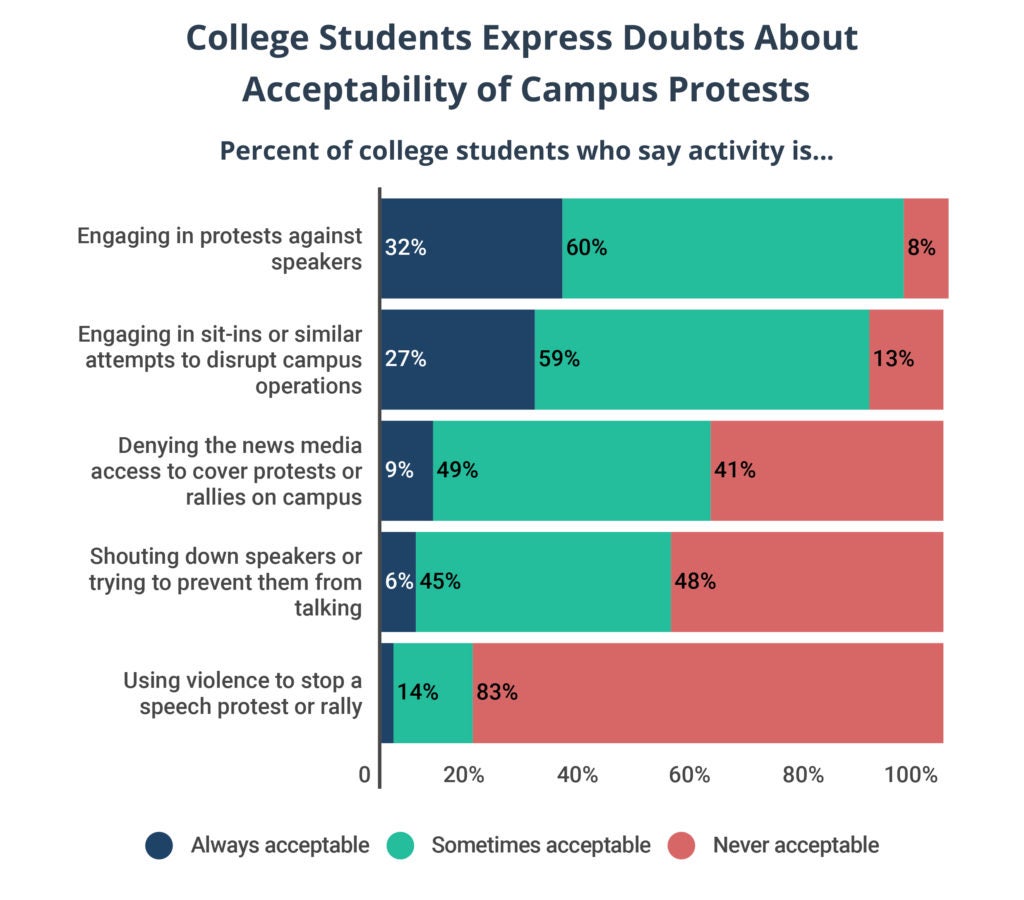 (Chart from the Knight Foundation report)

One area that the Knight Foundation didn’t explore is what actions, if any, students  believe should be taken against students who violate someone else’s First Amendment rights.

Butcher said he sees a “need for state legislative proposals for public universities to be inclusive of the First Amendment or risk federal involvement.”

Butcher expressed concern over the “threat of violence if action isn’t taken because people have been physically harmed and ‘shouting down’ will inevitably be taken to the next stage.”  He identified a “need to protect the pursuit of truth in asking hard questions, to preserve the college experience.”

Since most public universities are operated by state government entities, state lawmakers should be responsible for legislation requiring the enforcement of First Amendment protections on campus, Butcher said.

One major reform for state universities highlighted by Butcher would be a required adoption of a statement of commitment to free speech principles, with clear consequences for anyone who violates the free speech rights of others.

Chandler Thornton, chairman of the College Republican National Committee, told The Daily Signal that free speech on campus is a serious and growing issue.

“Among the values that have led to America’s greatness as a country is the right to free speech,” Thornton said in an email. “To remain strong as a country, we must continuously reaffirm our free speech rights, which are facing threats on college campuses and elsewhere.”

Political speech, in particular, is at the heart of the First Amendment. Americans must be allowed to advocate for their candidate and their positions without fear of censorship. Unfortunately, rather than encourage debate on issues of public importance, we have seen how colleges and universities have tried to silence points of view they disagree with, or impose burdensome limitations. Shredding our basic freedoms in the name of amorphous principles like ‘tolerance’ or ‘inclusion’ sets a dangerous precedent.

In March 2018, St. Olaf College President David Anderson barred conservative commentator Ben Shapiro from speaking at the private college in Minnesota. The president blamed the timing for being “concerning” as the date fell on the anniversary of what was later revealed to be a fake hate crime that inspired protests.

College Democrats of America, the student arm of the Democratic National Committee, did not respond to questions from The Daily Signal on First Amendment protections for students.

While Butcher claims work needs to be done at the state level, the U.S. Senate has begun to move in the direction of implementing federal laws to protect campus speech across the nation.

On Feb. 7, 2018, then-Sen. Orrin Hatch, R-Utah, introduced the Free Right to Expression in Education Act, which would amend the Higher Education Act of 1965 “to ensure that public institutions of higher education protect expressive activities in outdoor areas on campus.”

Hatch defended the bill in a National Review editorial, chastising universities such as Rutgers and University of California, Berkeley, for blocking conservative speakers.

Senate leadership referred the bill to the Committee on Health, Education, Labor, and Pensions, where it languished without further action.

This article was republished with permission from The Daily Signal.

Kaylee Greenlee is an intern at The Daily Signal.

The Immigrants Challenging Europe’s Code of Silence on Islam

Why Are So Many Female Teachers Sleeping With Students?

The Arrogant Ignorance of the 'Well-Educated'

Rowling and King Slam Into the Woke Diversity Cult

Bonhoeffer on the ‘Stupidity’ That Led to Hitler’s Rise